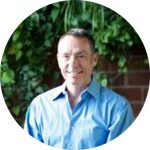 Dave Goetz, CMT is the owner of The Wellness Lifestyle LLC, Co-Director of HeartMind Bodywork in Boulder, Colorado and currently teaches qigong and maintains a personal and professional development coaching and bodywork practice.  In 1990, Dave began studying shiatsu at Ohashiatsu® Chicago under the directorship of Matthew Swiegart, COI. He discovered a life-long passion for Eastern thought when he read the Autobiography of a Yogi, by Paramahansa Yogananda at the age of 19.  Dave attended Indiana University where he studied Eastern Philosophy, Tibetan Buddhism, Taoism, and Environmental Studies, graduating in 1980 with a B.A. in Economics. He has been a daily practitioner of meditation using the techniques of Self-Knowledge as taught by Prem Rawat since 1979.

In 1982, Dave co-founded the Oak St. Market, a natural foods grocery store in Evanston, IL where he was the co-owner and managing partner, along with Steve Kriston. In 1997,  Dave and Steve sold the store to Wholefoods Market and then moved to Boulder in 1998 where he focused his passion full-time on massage, shiatsu, yoga and qigong. He attended the Boulder College of Massage Therapy in 2000, graduated with honors with over 1100 hours of training and was the president of his class. Soon afterwards he completed his Certified Strength and Conditioning Specialist, CSCS credential and was a personal fitness trainer and massage specialist for RallySport Health Club from 2002-2004.  In 2004 he formed a collaboration with Matthew and formed HeartMind Productions, the creator of the  HeartMind Shiatsu Meridian Chart and soon after the DVD, Harmonizing Heaven and Earth. In 2006, Dave co-founded the Bodywork Bistro along with Tim Clair which became one of the premier massage companies in Boulder which served over 29,000 clients. Regrettably the business closed its doors in the summer of 2019, but was purchased by Symmetry 360 where Dave is now assisting in carrying forth the original mission of bringing therapeutic massage to the Boulder community. He taught HeartMind Shiatsu, Chair Massage and Self-Care at the Healing Spirits Massage Training Program  from 2007-2018, and is now the lead Shiatsu Instructor at Boulder Massage Therapy Institute.